Aura is the Change

This week on the blog, Sara explains how Aura Finance aims to tackle coping with change in a world that is constantly moving and how you can slow down to appreciate it.

Last week in my Psychology of Spirituality class my professor pulled out a red vase during lecture. He posed the question: did this vase change from the moment I pulled it out of my bag to the moment I placed it on the table? Student after student answered no and expressed that it was the same vase. My professor told us we were all wrong.

You may be thinking, “how is it possible that the vase changed” – because surely that’s what I was thinking. After he told us we were wrong, students began to become angry and started arguing that it was impossible the vase could have changed. He claimed that the vase changed on an atomic level, and more than that there was a simple change given it was no longer present in his bag because now it was located on the table. His point: why were we so adamant that it hadn’t changed, and why couldn’t we just accept the fact that maybe a change did occur in some form? Upon further reflection, we really should have been thinking about why we were so angry when we were told a change took place. 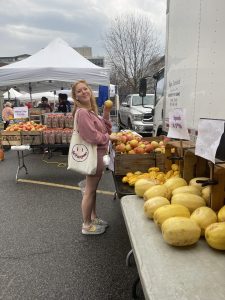 Hi! I’m Sara. A college student studying entrepreneurship and psychology in Washington DC, and I am the outgoing Growth Intern for Aura Finance. I learn new things daily in the classroom, but the biggest thing I have learned from college so far is that things are constantly changing. So many things happen in a day that I frequently joke with my friends that every day feels like an entire week which means every week is equivalent to a month. The fast paced, constant change can be overwhelming at times, especially when we make the assumption that things don’t change.

My time at Aura over the last fifteen weeks has further made me realize how quickly things can change in the environment of a growing startup. The beauty is that as leaders Kelsey and Courtney firmly believe that we shouldn’t be stuck in the way of doing things, rather we should actively find ways to change them. This idea is what drew me to Aura in the first place. Instead of continuing to live in a world where financial stress and confusion is accepted, Kelsey and Courtney designed a platform that will increase financial and mental wealth for years to come. More importantly, they are designing this platform with change – and you – constantly in mind.

Every time we get on a call together we are discussing ways to change operational systems in order to make the customer journey more enjoyable. It is understood that your personal financial freedom is a journey rather than a destination, and because of that it is of the utmost priority to the Aura team that their way of helping you changes just as rapidly as your individual situation.

When we fail to accept the simple fact that things are always changing we cause ourselves to constantly be left frustrated when change inevitably happens. If we slow down for a moment, there can be real peace in appreciating the present. At Aura we aim to allow you to be able to enjoy these present moments with the knowledge that the changes occurring around you can be beautiful instead of frustrating.

I envisioned my college experience as one full of movie-like moments, that I would look back on as the best four years of my life. I attempted to plan out my major, involvement, and goals for the future, but I became anxious each time something changed. Starting school during a pandemic and facing many more obstacles along the way created a lot of changes that felt frustrating and placed a real wrench in my plan. Meeting Kelsey and Courtney through my experiences here at Aura have allowed me to truly embrace time and planning, but more importantly it caused me to realize that with planning you must also be able to adjust to change. Life is full of change, but it is also whatever you are experiencing right now.

Thank you for taking the time with me over the last 15 weeks to slow down with us and take a moment to appreciate the constant change that goes along with this platform and our world. I look forward to seeing Kelsey and Courtney, as well as everyone else at Aura, continue to make change feel a lot more peaceful as Aura continues to develop.