This week, Courtney talks about meeting the future King and Queen of England, climate activism in the Bahamas, and how Aura is empowering people to invest in a better future.

On March 26, 2022, the Duke and Duchess of Cambridge came on an official visit to Coral Vita, the Revive Our Oceans Earthshot Prize winner. During the tour, co-founder of Coral Vita, Sam Teicher (aka “The Coral Farmer” ❤️), led them to our mangrove nursery. Three young Bahamian women from Waterkeepers Bahamas explained the vital importance of the plants to the future king and queen of England. Moments later, Prince William and Princess Kate were wrist-deep in soil and potting mangrove propagules. It was surreal. 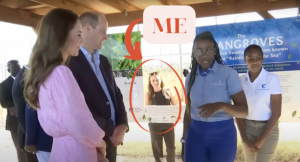 In October 2021, I had the honor of standing by The Coral Farmer, as he accepted the very first Earthshot Prize. Coral Vita’s efforts to grow climate change resistant coral to restore the world’s dying coral reefs is nothing short of inspiring. And yet, hearing the statistics day after day is still harrowing. 50% of the world’s coral reefs – which sustain 25% of marine life and the livelihoods of up to one billion people – are dead and we’re on track to lose over 90% by 2050. We’d need 720,000 divers planting coral 24/7/365 just to offset the current rate of loss.

The climate crisis is overwhelming. Feeling powerless in the face of an existential threat made me crave some sense of control. I started to criticize myself for my own shortcomings – forgetting to compost the waste, accidentally leaving the lights on, and generally just not being a ‘good enough’ climate activist. Anxiety has a way of doing that – making us look for opportunities to do more and do better – and to punish ourselves for not doing enough to change the situation.

And yet, sometimes when I feel powerless, I find it’s best to actually dive in and get my hands dirty. Last spring, the Coral Farmer and I went out to plant mangroves on the East End of the island. We stomped around in the shin-deep mud for hours and by the end of the day, sixty of us had planted hundreds of new mangroves and I was hooked.

Sure, coral reefs are exotic, but they’re also exclusive – if you can’t swim, snorkel, or scuba dive, you can’t plant coral. When only one in ten Bahamians are taught to swim, coral planting remains out of reach for ~90% of the population. Mangroves may not be as sexy as coral, but they are inclusive.

Mangroves save lives and symbolize hope. On September 1, 2019, Hurricane Dorian parked over Grand Bahama for nearly 48 hours, the 220mph winds and 23-foot storm surge uprooted 70% of the island’s mangroves. Swaths of mangrove forests were deposited in the middle of the primary highway cutting off access to the East End of the Island and nearby cays for weeks.

When the roads were finally cleared and relief workers were able to reach Sweeting’s Cay, they were astonished to learn that every single person who stayed during the storm survived. When asked how they withstood the storm surges, they pointed to the mangroves. The mangrove forests held off the surges long enough for everyone to reach higher ground. Unfortunately, residents of nearby McCleans Town had cut down their mangroves in recent years. They faced the storm without any natural protection and the death toll remains heartbreaking.

In the end, The Bahamas lost 44,000 acres of mangrove forests during Hurricane Dorian. Mangrove forests, like coral reefs, are vital to ecosystem preservation. In addition to protecting coastlines, cleaning water, and powering fisheries, they also provide a valuable economic opportunity for coastal communities as a source of Blue Carbon credits – ocean-based carbon sequestration credits that companies can purchase to offset their own carbon emissions. It may well take years to develop Blue Carbon markets, but the economic opportunity for coastal communities to move away from extraction or tourism-based economies towards a restoration economy is here now.

With The Coral Farmer’s encouragement, I’ve been channeling my climate anxiety into tangible action and supporting incredible local groups and mangrove experts around the world developing and implementing community-based mangrove restoration efforts. I’ve also been aligning our personal investment practices with our climate activism.

Financial inclusion and education is paramount to the effort to fight climate change. Expanding educational opportunities and family planning resources for girls and women around the world is more effective in fighting climate change than many green technologies. It is why Aura promotes values-based investing and works to educate users about their collective power to move mountains and markets. Our mission is not just to help users achieve financial security and independence, but also to empower people to put their money to work and invest in a better tomorrow, today. And yet, while it often feels like we are running out of time for the planet and for each other, there are reasons to remain hopeful.

At Aura, our mission is to create an inclusive investment platform and a safe, non-judgmental community where users can share and source money matters and investment advice while gaining confidence in themselves. We believe that having more diverse investors in financial markets will lead to more diverse conversations about our economic structures, which will lead to more innovative solutions for building more inclusive financial systems.

I often still feel overwhelmed by the seemingly insurmountable obstacles in my way as a founder, community member, and a romantic partner. Even now, I struggle to call myself a climate activist thinking that I still haven’t done enough to earn that particular accolade. But it doesn’t really matter what I choose to call myself or even what Princess Kate thinks of me (okay, that might matter a little) – the point is that in the face of adversity, I choose to believe in hope against all odds and to work a little bit harder to leave this world just a little bit better – and for me, that simply has to be enough.