The Mysterious Disappearance of the Crypto King 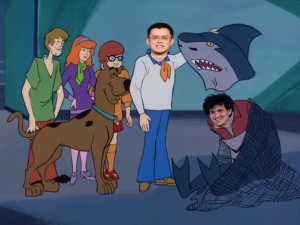 It was a dark and foggy night.

Scooby-Doo and the gang were in the Mystery Machine on their way to a concert, but they got lost – thanks, Fred.

As they pulled off on a side road, a tall, ominous lumberjack-looking man walks towards them with a lamp lighting his way. The gang asks for directions. The stranger tells them that they will come to a fork in the road – the left leads to the long way around, the right is a shortcut, but it will take them past a Haunted Mansion along the way. He urges them to take the long way.

Guess what happens next?

You guessed it. Curious Fred can’t help himself and drives the gang straight to the mansion. As soon as they arrive, the teens split up to investigate. Fred and Daphne pair off leaving Velma, Shaggy, and Scooby to explore the upstairs. They pass through a room so dark, all you can see are three pairs of eyeballs, they emerge holding hands with the Headless Specter in the middle of the group! The Headless Specter lets out an evil laugh and the teens scatter – a musical interlude and chase scene follows eventually reuniting the gang in the basement.

The gang finds a clue – journal entry explaining that there is a portrait in the house of the original owner and he’s pointing to the secret location of a buried treasure.

The gang rushes to the portrait hanging over the fireplace and discovers a man pointing towards an old barn. Shaggy and Scooby are promptly dispatched to investigate.

As they’re walking, they encounter a Venus Fly Trap and offer it a Scooby Snack – it repays the duo’s kindness by trying to bite Scooby’s head off which sends him flying into the arms of… the Headless Specter!

A second chase scene follows Scooby, Shaggy, and the Headless Specter across the grounds, into the air, and crash-landing in a chicken coop near the barn. The Specter groans and out pops… a head.

What does this have to do with FTX?

It’s a tale as old as time – people do crazy things for money.

Scooby Doo and the gang have been in countless haunted houses, mansions, tombs, castles. You name it, they’ve seen it and even though, they’ve never met a genuine supernatural villain –they keep and running from ghosts or goblins, and even sharks! Every time, though, it’s the same old story – greed.

In real life though, Sam Bankman-Fried (“SBF”) and Bernie Madoff present themselves as “Wizards of Wall Street” and “Crypto Kings” to hide the truth — there is no magic and, when the mask finally comes off, there is also no money.

In many ways it’s a classic story.

Boy becomes a quantitative trader on Wall Street, sets up quantitative trading firm (Alameda Research) and makes lot of money in crypto arbitrage (i.e. buying bitcoin in one market and selling it at a markup nearly simultaneously in a different market). Boy uses trading profits to set up a $32 Billion crypto exchange, market takes a downturn and boy uses customer assets to prop up struggling trading firm in the hopes of recouping enough revenue to return customer assets back to customers before anyone notices, customers notice, boy gets caught, boy goes bankrupt.

In 2021, it seemed like Sam Bankman-Fried (“SBF”) had it all – a successful trading company, a $32 Billion crypto exchange (FTX), a token (FTT) and enough money in the bank to buy the rights to the Miami Heat’s home arena, sponsor a Formula One racing team, and become a top political donor in the 2022 midterm elections.

He also became the poster child for the Effective Altruism (“EA”) movement, which, among other principles, advocates for amassing incredible personal wealth for the purposes of giving it away to “do the most good.”

By most accounts, SBF was practicing this ideology to fund efforts to stop animal cruelty and investing in new technologies that would help end poverty and stop suffering throughout the world – things that would do the most for the most people. And until last week, it seemed to be working.

Today, the 30 year-old crypto wunderkind is jobless, his company declared bankruptcy, Billions of dollars are missing including ~$1Billion of customer assets, and the entire crypto community is in jeopardy.

2022 has been a rough year in crypto, but for people playing at home, SBF and FTX seemed well-positioned to ride out Crypto Winter. In fact, when other crypto companies were floundering, FTX was swooping in to bail them out – increasingly, ironically, bringing more and more decentralized finance institutions under one centralized entity at FTX.

Continued support from marquee investors like Softbank, Andreeson Horowitz, Tamasek as well as close ties with policymakers in Washington, DC gave the illusion that FTX was “too big to fail.”

Last week, that illusion crumbled when news broke on Nov. 2 that maybe FTX wasn’t as solvent as it appeared and perhaps there was some problematic self-dealing between FTX and SBF’s quantitative trading firm, Alameda Research.

Panic ensued and customers sought to withdraw more than $6 Billion in FTT from FTX, causing the coin to collapse in 72 hours.

On Nov. 8, CZ sought to quell the panic and announced that Binance would buy FTX, pending due diligence.

36 hours later, Binance walked away from the deal and the world learned that the Crypto Wunderkind was a fraud.

What we know now.

SBF and co. built a “back door” that allowed FTX to transfer customer assets to Alameda Research without raising any red flags.

In traditional finance, there are lots and rules and regulations that govern the management of customer accounts. It’s a big no-no to transfer customer assets of one institution to pad the balance sheet of another.

One can only assume that SBF hoped that providing a cash infusion to Alameda would prop up the firm long enough for it to recoup its lost profits and pay back the $10 Billion to FTX before any customers noticed.

And, SBF maybe could have gotten away with it if it hadn’t been for those meddling kids and their dog CoinDesk reporters and Binance CEO, CZ.

The moral of the story is simple: don’t mishandle customer assets.

The second lesson, though, is don’t be greedy.

For years, crypto and decentralized finance has been held up as the great equalizer, an unparalleled opportunity for everyone to get rich quick and build wealth.

And yet, when the music stopped, the promise of distributed wealth generation evaporated with FTX seemingly overnight.

The mysterious stranger warned them not to go near the mansion, but when Scooby and the gang got a whiff of a good mystery, they simply couldn’t help themselves.

They had to go treasure hunting.

For two and a half years, the world has watched SBF and other “Crypto Kings” emerge from the pandemic as newly minted, self-made Billionaires.

If there’s anything to learn from the great “unmasking” of crypto kings and Ponzi-scheme Princes, it’s that if something sounds too good to be true it probably is.

Getting rich quick is not only elusive for most investors, it’s also rarely enough for those who succeed. It’s not the security they’re after – it’s the chase.

Why people chase money is just as important as how we chase it.

If you’re building towards a strong future with a plan, you’re less likely put your goals in jeopardy chasing shiny objects.

If you’re in it for the thrill without an end goal in mind, prepare to spend your days chasing imaginary ghosts returns.

So, does cryptocurrency still have a place?

Sure, maybe.  Cryptocurrencies were designed to function as currencies, not as speculative assets. Speculation comes with risk, risk without proper regulation can lead to a total wipeout like we saw with FTX. Until there is regulation in place to protect consumers, we’re likely to see a slew of crypto companies continue to crumble.

Does crypto have a place in your portfolio?

That depends… on you, your risk appetite, and your personal diversification strategies. [NOTE: If you’re an Aura user, check out our crypto lesson for a deeper dive]. If you really want to invest in crypto, do your homework and to be on the safe side, don’t invest more than you can afford to lose.

At Aura, we believe in safe, long-term investing to build wealth. It might not be nearly as sexy, but it’s a hellova lot safer. We also believe in calculated risk. IE: if you don’t have an emergency savings fund, maxed out retirement and a well-balanced portfolio of stocks and bonds, you don’t have much business being in crypto.

If you can’t afford to lose it, don’t do it.

So, what should I do with my money now?

Interest rates are on the rise, the stock market is still surfing correction waves, and it’s almost impossible to “time the market.”

At Aura, we like to play it safe and take the long way around.

A personalized index fund that tracks the market and aligns with your personal values can help you achieve your financial goals and feel good about how you get there.

While nothing is every guaranteed in love and finance, the stock market is about as reliable as the gang’s ability to solve a mystery.

So, if you want to minimize your downside and you’re ready to invest to grow wealth, it’s time to start investing like the wealthy: deliberately and consistently, over time.

Shortcuts are often bumpy – take them at your own peril and be prepared to encounter a few ghosts, ghouls, and greedy nephews on your journey.